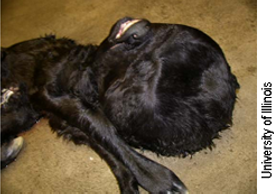 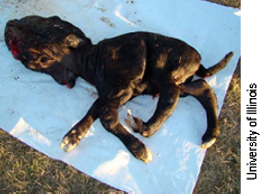 With increased reporting of abnormal calves, I often recognize other lower frequency conditions within the populations that require investigation. We experienced this most recently with tibial hemimelia (TH) in Shorthorns when pulmonary hypoplasia and anasarca (PHA) was discovered in the materials submitted for consideration as possible TH cases.

In the case of Arthrogryposis Multiplex (AM) in Angus calves, Dr. Beever and I have received fifteen reports of calves with an extreme form of Neuropathic Hydrocephalus (NH) (Figures 1 and 2). The calves are born near term and have 25-35 pound birth weights. The cranium is markedly enlarged (volleyball to basketball sized). The bones of the skull are malformed and appear as loosely organized bony plates that fall apart when the cavity is opened. The cranial cavity is filled with fluid and no recognizable brain tissue is evident. The spinal canal is also dilated and no observable spinal tissue is found. Epidemiologic investigations of this condition are underway. We have pedigree information on 14 of 15 reported cases. We are examining these for relationships and using tissue to explore the genome to see if any regions are segregating with the phenotype. One calf was a commercial calf and full pedigree was unknown. Several calves have been tested extensively for viral infection by the University of Nebraska and at the National Veterinary Services Laboratory. To date, no evidence of viral involvement has been detected. I have seen a similar phenotype in two other breeds, so it is premature to make any conclusions as to cause. Breeders need to be vigilant in their reporting, as we do in our investigations, to identify and remove problems early on. Figures 1 and 2 present images of Neuropathic Hydrocephalus calves.